"Many have said of Alchemy, that it is for the making of gold and silver. For me such is not the aim, but to consider only what virtue and power may lie in medicines."
- Paracelsus - 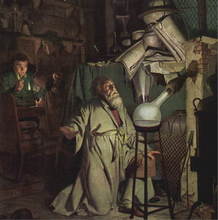 Now, in the previous lessons, I've practically shown cultures that revel in the work of alchemy. With the exception of Avicenna, who ended up doubting alchemy and ultimately founding the medicinal sciences, the general population of alchemists believed in their studies and theories. In many ways, the practice and development of alchemy in the centuries before managed to pave way to the medieval mind. For the medieval alchemist, what better way to reconcile their metaphysical ideas within the confines of Nature? Alchemy couldn't have found a better niche if it wanted to.

But this kind of reconciliation posed a problem anyway. Instead of a perfect union between the physical and ethereal realms, alchemy caused in itself a controversy. If alchemy was the medium in which man could become attuned to Nature, then wouldn't that be a godlike act? What would stop these alchemists from abusing the so-called "secret art?"

Ultimately, it is this abuse that taints the practice of alchemy during the medieval era.
By the 1200s to 1300s, the notion of transmuting lead into gold began to gain a more wary audience, sometimes to the point where the alchemist peddling this story of lead-to-gold would be greeted in a hostile manner. At the rate the scam artists increased during this time period, it is understandable that most people scoffed at alchemy in general. By 1310, alchemy was forbidden by the Roman Catholic Church, and by 1404 in England, alchemy--or the act of transforming objects to gold--became punishable by death. Suffice to say that most alchemists, if they were at all practicing, did so within the confines of their home.
Nature's Realm
While scam artists and the promise of more false gold were major factors in the taint of alchemy, there is no denying the underlying belief that if alchemy truly did exist, that it would be a human defiance of Nature's work. Alchemy is--for lack of a better analogy--is a ball-changer for many folks who did not understand it. The simple-minded believed alchemy to be a work of magic; dangerous, occult, ultimately beyond their reach. The devoutly religious saw it as a defiance of the natural world. Alchemy hastened the natural course of things, it created situations that could not easily be explained away.
Roger Bacon was a contemporary of Albertus Magnus, and many times Bacon praised the Dominican friar in his studies. Bacon himself was a proponent of alchemy, in the same manner that Magnus was. He found that alchemy opened up a new set of natural science, and that through the study of alchemy, one would find a more efficient way of learning about the natural world. Different to Magnus, Bacon still believed that transmutation and the Great Work was possible, that gold could be synthesized, and that immortality could be achieved. Yet, even with these beliefs, Bacon sought to mathematically explain his alchemical theories.
"For what we do presage is not in grosse,
For we are brethren of the Rosie Crosse;
We have the Mason Word and second sight,
Things for to come we can foretell aright."
- The Muses' Threnodie -

The Order of the Rosy Cross 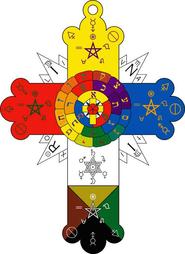 Now, in comes the 17th century, and the re-establishment of the Age of Alchemy is put into effect. Of course, by this point, while alchemy is still considered a dubious protoscience, one organization sought to create a revival. Behind this organization sat Christian Rosenkreuz, legendary founder of the Rosicrucian Order.

The Order of the Rosy Cross, or the Rosicrucian Order, was a secret society, perhaps even pre-dating the order's "official" creation. Due to the delicate topic at hand--alchemy, that is--the brotherhood of alchemists congregated in secret. Membership was exclusive to alchemical scholars and thinkers, those who sought to uncover the past and find insight into Nature, as well as the physical and spiritual realms. In this way, it was natural for the Rosicrucians to turn to alchemy to search for this enlightenment.

Legends vary about the creation of the Rosicrucian Order, though it is agreed that a figure by the name of Christian Rosenkreuz spearheaded the establishment. Whether he was a real person or not is still up to debate, but this figure is where the order itself gained its long-lasting name. Some stories pinpoint the Rosicrucian belief to be based upon the idea of the "secret wisdom," an idea from Arabic alchemy. Through the use of this secret knowledge, the Rosicrucians' ultimate goal was to transform the sciences and arts of Europe.

Some rumored members and predecessors include Robert Boyle (father of modern chemistry), Sir Isaac Newton (famed physicist and mathematician), Rene Descartes (philosopher and mathematician), and Cornelius Agrippa (astrologer and alchemist). Even Renaissance man Leonardo da Vinci was thought to have practiced alchemy, a trait he shared with the Rosicrucians. 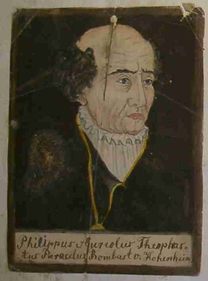 Paracelsus
Considered one of the fathers of modern medicine, Paracelsus (originally Philippus Aureolus Theophrastus Bombastus von Hohenheim) was one of the renowned Renaissance men of northern Europe. He studied botany, astrology, and alchemy. Where most of medieval Europe were still reeling from the transmutation of metals to gold, Paracelsus returned the study of alchemy to what he considered was the more important aspect of the Great Work: herbal and medicinal purposes.

Paracelsus believed in a body's wholeness--where the body merged with the soul, spirit, and mind of Nature in order to create a healthy lifestyle. In this respect, he was most well-known for his work in herbal alchemy. Like Da Vinci, he closely examined bodies in order to further his study in treatment and diagnosis. In this manner, he managed to find seven magisteries (healing or transmutation substances) from different plants.

While he dismissed the belief of the more arcane versions of alchemy (those believed by Agrippa and Nicolas Flamel), Paracelsus used astrology when creating his own tinctures. He mixed chemicals and minerals to form medicine. He isolated and discovered--or at least named--the element zinc. It is even said that he created laudanum, the opium tincture that would undoubtedly become popular during the 19th century.

Paracelsus acknowledged the four Greek elements of alchemy (fire, water, air, and earth), but also believed in the Arabic tria prima, or three spiritual substances: mercury (mind), sulfur (soul), and salt (body). Through the understanding of the tria prima, one could develop a method of curing diseases.
For your lesson assignment, click here.
Content © Cassandra Lobiesk 2012-2013. All rights reserved.