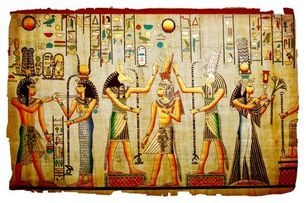 Throughout history, the ancient Egyptians have been known to be innovative thinkers, producing works across all manner of the scientific world. They built the tombs and pyramid temples of pharaohs. They produced hieroglyphs and created the method of preservation--the embalming and mummification processes. They synthesized a monarchy whose royal line can be said to be descended from their pantheon of gods. All in all, the civilization had a hand in many mediums.

It is no surprise, then, that alchemy is believed to have originated from a place filled with myth and magic. Most ancient Egyptians believed that their knowledge of the arcane came predominantly as gifts from their god of wisdom, Thoth. In fact, legend even has it that Thoth put forth the works of alchemy in an Emerald Tablet.

Egyptian alchemy gained its importance due to two things: metallurgy and mummification.
The Chartomi of Egypt
Clearly, it takes skill and the hidden knowledge to be able to manipulate metal and fluids in order to transmute and embalm. This is why mummification became a sacred ritual, practiced only by the chartomi, those philosophers who have read the sacred scriptures ("scrutatores naturae"). Equivalent to the magi or the sorcerers, the chartomi's skill in embalming evolved, and their knowledge of the chemical processes became applicable to other works, namely metallurgy and glass-making.

The Number Seven
In the previous lesson, the numbers nine and five played a major role in determining relations between colors, elements, and planets. In the same manner, the Egyptians also linked metals to planets. The difference is that while nine and five were important to the Chinese, it is the number seven that is venerated in Egypt.

The chartomi drew up a link between body and spirit through the use of the metals and the celestial bodies of the planets. For the Egyptian alchemists, the seven metallurgic elements became linked with the seven "planets". 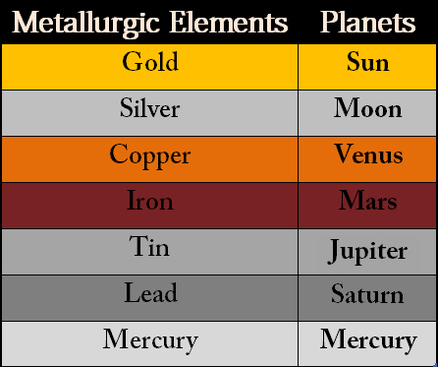 The seven metallurgic elements in relation to the planets. 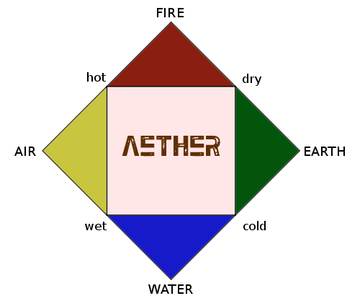 The Greeks have a lot to boast about regarding alchemy as well. In fact, they're probably attributed with naming half the terms in the alchemical universe. Hermes Trismegistus, hermetic art, and Khemia (Black Art) are only some of the alchemical terms that have endured for almost two millennia.

One major cause of this spread of alchemy from Egypt to Greece was Alexander the Great. So in love with Egyptian culture, he adopted quite a few practices of the civilization, one of which was alchemy. By the time alchemy mixed with Greek thinking, it developed further through the studies of the Greek philosophers (or as Pseudo-Demokritos the alchemist calls them, his fellow-prophets).

The Elements
As opposed to the previous numbers (seven, nine, five...yikes, we're getting so many sacred numbers at this point!) mentioned in the lessons, the Greeks discarded all of them and followed their predecessors in the classical thinking. Greek classical thinking attributes the four elements (okay, five, really) to Aristotle and Plato. These four elements (Fire, Air, Water, and Earth) produce a balance in the physical, natural world. I say five because while the philosophers acknowledge that the four elements are observable manifestations in nature, the fifth, Aether, is not. When mixed, the four elements can produce hot, dry, moist, and cold properties, whereas Aether (also called the quintessence, for quint) removes itself from the physical world. When the four "physical" elements are at a balance, so is the fifth.

Science and Religion
Perhaps one important breakthrough in Greek alchemy was due to the Greeks' ability to separate alchemy from religion. In Egypt, Maria the Jewess (and even Zosimos of Panopolis) believed that their knowledge of alchemy came from a higher deity, namely God or Thoth. Greece, being the center of philosophical thought and logic, chose logical reason as opposed to the highly improbable deus ex machina (divine intervention). Because of this separation, the Greeks put stock in the four elements, unchangeable and fixed. However, the elements' properties were changeable since the properties were determined by which elements were mixed together. This change led to the belief that transmutation of gold could be possible. Alchemy, then, became a mission to change metal into gold. 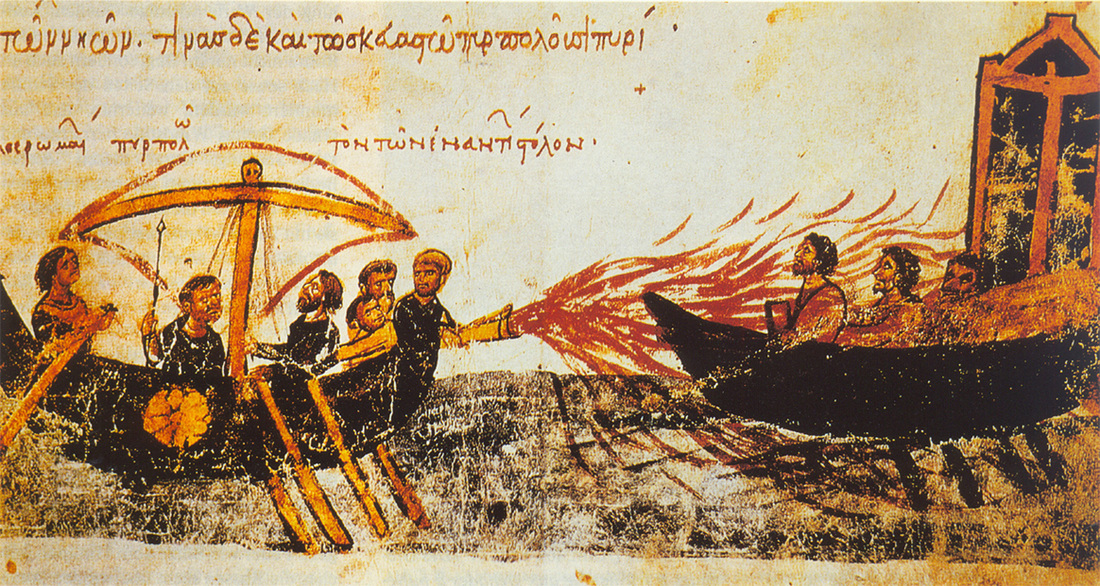 Greek Fire
One of the most fascinating alchemical works done by the Greeks would have to be Greek fire, a mixture of incendiary materials. This commodity was coveted by even the Arabs, who sought to conquer the west by way of the Bosphorus (a strait between Europe and Asia). The Byzantines utilized Greek fire to the best of their ability, often the weapon made the difference between victory and defeat. Between the 9th and 10th centuries, the Arabs attacked Constantinople (what is now known as Istanbul) through the use of warships. As the Arab fleet approached the Byzantine city, Greek fire was poured into the Bosphorus, setting the ships aflame. The damage was heavy, and the Arab fleet was destroyed. This happened several times during the course of the centuries (though by 1453, Byzantium ceased to exist). Even as the Arabs finally did take over the city, Greek fire was a lost recipe to them, for the alchemists carried the secret to their graves. In fact, Callinicus of Heliopolis, the Byzantine alchemist thought to have created Greek fire, had smuggled the recipe out of Constantinople before the city's demise. To this day, debate on what substances were used to create Greek fire continues on, though there has been no definite answer to the mystery.
"As the sun is, so to speak, a flower of the fire and (simultaneously) the heavenly sun, the right eye of the world, so copper when it blooms—that is when it takes the color of gold, through purification—becomes a terrestrial sun, which is king of the earth, as the sun is king of heaven."
- Zosimos of Panopolis - 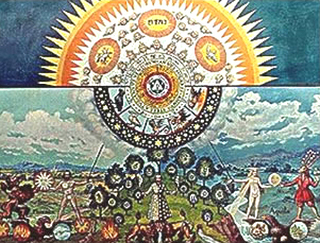 One of Zosimos' illustrated visions.
Zosimos of Panopolis is a figure filled with riddles. No, really, he practically reveled in the act of writing cryptic statements, especially about alchemy. Like many of his Egyptian and Greek contemporaries (circa 300 or 400 AD), alchemy was a focus on the soul (it was only later that the Greeks became focused on transmutation of gold).

Likely the most prolific of the Greek alchemists, Zosimos has even undergone the task of compiling an encyclopedia of alchemy. By the end of his life, his alchemy encyclopedia reached 28 volumes, one for each letter of the Greek alphabet, plus an extra four for the added Byzantine letters during the era.

Zosimos made a number of contributions to alchemy, one of which was the isolation of arsenic (kids, don't try this at home). The other was perhaps the more important bit: the realization that chemical reactions can be induced by the use of a catalyst. Of course, this now borders into the science of chemistry, but for Zosimos, such catalysts were called "tinctures," and most of the time, these catalysts are found within the confines of the four elements.

Zosimos believed in the higher power, following in the footsteps of Maria the Jewess. In his accounts of the origin of alchemy, the secret knowledge came from the angels of heaven. Upon falling in love with mortal women, the angels alighted onto earth and married these women, gifting them with the secret knowledge of nature. From the knowledge of the women came the book "chema," from which alchemy was born (and, later on, chemistry would develop).
For your lesson assignment, click here.
Content © Cassandra Lobiesk 2012-2013. All rights reserved.