"Know the white, keep to the black," and the Numinous Light will come of its own.
- Cantong qi -
Eastern and western alchemy are definitely worth noting for their differences and similarities. In fact, it isn't until Paracelsus where Western alchemy became focused in alchemy as a spiritual enlightenment as opposed to a physical transforming of lead to gold. The Indian and Chinese mindset have always been focused in more of a godlike transcendence in terms of working on alchemy, and it is here that the two are closely linked. 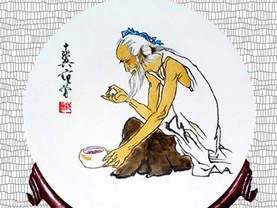 As I mentioned in Lesson 1, the Chinese practiced the creation of alchemical gold because of their belief in gold as a symbol of purity. Of course, because a natural deposit of gold comes off as a slow process, it became imperative that gold became processed. Alchemized gold was soon believed to be purer than natural gold, and by ingesting such gold in potions and tonics, one has the chance of reaching that level of purity, and perhaps even immortality.

This belief is further bolstered by the Chinese philosophy of Taoism, where the story of the Immortals (or the hsien/xian) come to play. The hsien are believed to be spirits of mortals who have found a way to transcend to a higher being, that of the Immortal state. Among one of the famous Eight Immortals is Zhongli Quan (or Chung-li Ch'uan), an ancient alchemist and wanderer who was believed to have found the secret of immortality through meditation.

Chinese alchemy was formed on the basis of two foundations: the idea of the Contraries (or Yin and Yang), and that of the Five Elements.

Yin and Yang, the Contraries 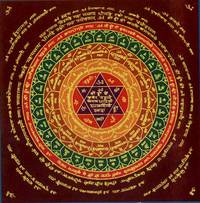 Okay, clearly I got carried away with Chinese alchemy, so history on Indian alchemy is going to pale in comparison. The idea remains the same, however, since India itself gained much influence of their study in alchemy from China. Longevity, wholeness, immortality, and transcendence. All are important ideas within Indian alchemy, so it is not a surprise that alchemy in India overlaps with that of China.

A renowned name in Indian alchemy is Nagarjuna. Again, like Hermes Trismegistus and Ostanes, Nagarjuna is believed to be a name corresponding to a number of authors who have written a fair share of alchemical works. For Indian alchemy, while the transmuting of gold and silver from less worthy metals is indeed a common goal, there is definitely more emphasis in the use of mercury to attain this goal. In fact, finding the Elixir is not possible without going "the way of mercury," or "rasayana" in Sanskrit.

The mercurial process is related more to Indian alchemy due to their philosophy of Tantrism. I don't want to get too into the philosophy itself, but the idea connected to alchemy is that the ingestion of such an Elixir of Immortality can lead to the purification of the body. This bodily purification can lead to the development of magical ability--among them include lightness, heaviness, invisibility, flight, and invulnerability. 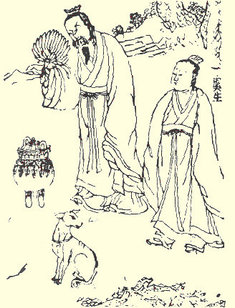 Wei Po-Yang, his pupil, and the dog
Among the figures of Chinese alchemy is Wei Po-Yang, a man considered as the "Father of Alchemy." Whether he is the Father of Chinese Alchemy or of Alchemy in general, that remains open, depending on which alchemy origin story you are more inclined to believe. Wei Po-Yang's surviving alchemy book, called Ts'an T'ung Ch'i (or the Cantong qi), is said to have been the oldest surviving book in Chinese alchemy (dating back to 142 AD).

The Story of Wei Po-Yang, the Pupil, and the Dog
Like many of the Chinese alchemists of his time, Wei Po-Yang worked on the creation of the Elixir of Immortality. In order to do so, he believed that he needed to study in isolation. With this in mind, he moved his laboratory to the mountains, taking with him only a dog and three of his most trusted pupils. Many nights and days later, he had completed his first elixir, though whether it was the true Elixir of Immortality, that still remained to be seen.

In order to test its potency, Wei Po-Yang administers the elixir to his dog. The unfortunate dog, however, dies in the process, which leads to Wei Po-Yang's mistrust of his solution. With no one else to test it on--and the pupils reluctant in ingesting such an elixir, Wei Po-Yang takes the solution himself. One of his pupils, loyal to a fault, also tests the elixir, and both he and his master die in the process. The remaining two pupils, seeing the fate of their master and colleague, opt out of taking the elixir, and instead remove themselves from the mountain.

However, the end of Wei Po-Yang isn't as tragic as it seems, for after the two pupils leave, Wei Po-Yang revives from his deathly state. He rouses his pupil and his dog, and all three transcend to become hsien.
For your lesson assignment, click here.
Content © Cassandra Lobiesk 2012-2013. All rights reserved.