"As all things were by the contemplation of one, so all things arose from this one thing by a single act of adaptation. The father thereof is the Sun, the mother the Moon. The wind carried it in the womb, the Earth is the nurse thereof."
- Emerald Tablet - 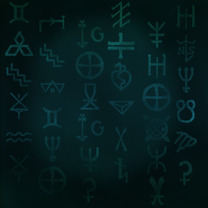 Before I get into the history of alchemy, some explanation of what this art is truly about.

Alchemy is an ancient "science", practiced by scientists, philosophers, and doctors during a time when the Natural and spiritual worlds were major mysteries (though one can argue this being the case today...but never mind). For the most part, alchemy deals with the idea of transmuting--or changing--Nature's organic metal to a purer, transcendent form. The purpose for this is not only to turn any metal (lead and silver, for example) into gold, but to gain the secrets for the creation of the ultimate Elixir--or the Philosopher's Stone.

There appears to be some dispute regarding the origins of alchemy, and chances are if you ask a historian or alchemist or even a language scholar, you'd get several different answers. It's not a surprise that such a confusion exists, because even the most isolated "cultures" had borrowed or influenced their neighboring countries. This might be the case here as well: alchemy existed in different forms for different cultures, but their movement from one geologic area to another helped to spread ideas around.

There are probably more theories on the origins of alchemy, but in the interest of not getting too wordy (hah!), I'm narrowing it down to two places. 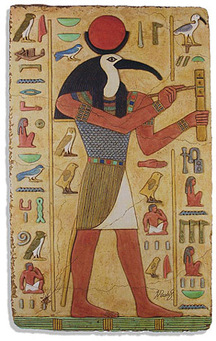 Thoth, or Hermes Trismegistus
One origin places alchemy as having been birthed in ancient Egypt. This isn't so far-fetched, considering that the ancient Egyptian civilization was very aware of their surroundings, being one of the foremost mathematicians and engineers of their time.

Egyptian myths place Thoth as the supreme expert in alchemy. This is because Thoth is the Egyptian god of wisdom, the deity for magic. In many myths, Thoth has even manifested as a human, one whom the Greeks called Hermes Trismegistus ("Thrice-Greatest Hermes"). Additionally, the Egyptians also have Isis, the goddess of magic, and also a practitioner of alchemy. One story even pits Isis together with Thoth, where Thoth teaches Isis the secret of preserving--and even bringing a god back to life.

Myths are all well and good, but here we have another reason for why alchemy may have originated from ancient Egypt. The word "alchemy" is said to have come from the ancient Egyptian word "kēme" or "black earth." The ancient Greeks use the word "Khem" or "Khemet" ("The Black Land") to refer to their Egyptian neighbors, mostly due to the dark sand that wash onto the shores of the rivers in Egypt. From there, the Greeks have "Khemia" or "Black Art," which then derived to the Arabic "al-kimia." Certainly, the spread of alchemy from Egypt was made possible by the conquerors in the west and the traders and travelers of the east.

China, on the other hand, boasts a similar etymology. Where the Greeks derived their word for alchemy from the Egyptian "kēme," a second argument points the word "alchemy" to come from another older, and more exotic word: the Chinese "kim" or "chim" for "aurification"--or the act of working with/in gold. Owing to the trading and cultural influences of China and India to western culture, it is possible that this  Chinese origin was what spread toward Egypt, which then in turn spread to Greek culture.

Ancient China did not value the gold itself, though the idea of "gold" for them stood for a perfect, immortal state. Because it is believed that gold does not rust or lose its color through the passage of time, the metal itself has symbolized a transcendent state of existence, one that the Chinese tried to emulate through the use of alchemy.
"One becomes two, two becomes three, and by means of the third and fourth achieves unity. Thus two are but one."
- Maria the Jewess - 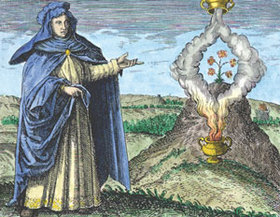 The Balneum Marie, or Mary's Bath
Here I'm going to briefly mention the legendary figures from where most of the latter alchemists get their "references" from. While these figures may not have necessarily existed (sometimes they might be multiple people throughout the ancient years), there is some amount of evidence that the legends have a tinge of truth in them.

Hermes Trismegistus
There are many legends surrounding the figure of Hermes Trismegistus, and a number of them actually extend to his being Thoth, the Egyptian god of wisdom. The Greek name means "thrice-greatest Hermes," or "three times great Hermes," which might also lead to the Arabic belief that Trismegistus was actually three different people.

In the Arabic alchemic tradition, Trismegistus took the form of

Some of the more famous alchemy theories and ideas derive from Trismegistus, including the Emerald Tablet and the theory of the "chemical wedding." He was also said to have written the Corpus Hermeticum, which is a collection touching upon Egyptian creation myths.

Ostanes
This one is a more elusive name, because he's not only renowned as an alchemist, he's also thought to be a magus, or a mage. Mentioned first by Hermodorus in classical and medieval literature, Ostanes is an interesting character. Like Hermes Trismegistus, Ostanes might be the name of a number of people throughout history that come from the family line of Zarathustra (a renowned prophet and founder of Zoroastrianism).

By 100 BCE, the name Ostanes became linked to those with "secret wisdom," such as divination, necromancy, and alchemy. Ostanes is also believed to have known the mystical properties of plants and stones--which, if he truly was an expert in alchemy, then this should be a given. One known work that refers to Ostanes' writings is The Book of the Twelve Chapters on the Honourable Stone (don't get me started on trying to spell the original Persian translation of this book).

Maria the Jewess
Known as the Jewess and/or the Prophetess, Maria is probably considered one of the most famous figures of ancient alchemy. She was not only considered an expert in the theory of alchemy, she was also a practical alchemist who was said to have invented alchemical equipment for use by later alchemists.

Of the Four Degrees of Fire (a process that takes heating from the lowest common fire to the highest naked flame), the first degree--Balneum Marie, or "Bath of Mary"--is named after her.
For your lesson assignment, click here.
Content © Cassandra Lobiesk 2012-2013. All rights reserved.